Aisle Rocket Studios is the digital powerhouse behind iconic household brands like Whirlpool, Maytag, Sears and more. The agency’s approach is all about being fast and nimble. With a portfolio of 25+ brands, 250+ employees, four offices and remote associates, Aisle Rocket Studios is not your typical agency. As featured in CIOReview, ARS’s Chief Digital Officer Kashif Zaman explains, “Our clients see us as an extension of their team. We are their growth hackers and relentless problem solvers.”

Distinguishing themselves from the typical agency model, the designers at ARS identify themselves as builders. As Zaman puts it, “It’s the idea that the development team is technically a member of the creative team and there is a level of homogeneity between the roles — their skill sets are different but the creative process is interchangeable.” Therefore, one of the core design principles at ARS is that 80 percent of the creative process should take place in the browser. But given the agency is spread out across four locations with remote associates, real collaboration was a challenge. That was until the Whirlpool account team made big waves.

So many files in so many places!

Matt Carson, Creative Director at ARS working remote in Scottsdale, was brought onto the Whirlpool account last minute to help with a particular project with a tight deadline. With a short turnaround looming, Carson recalls colleagues sending all sorts of native work files — some in Sketch, others in Photoshop. “It was a hot mess,” explains Carson, “there was no central process for the organization.”

Carson’s primary objective quickly became to establish a centralized toolkit. So when Isaac Vander Ark, Associate Creative Director at ARS, sent Carson a Figma link, Carson immediately laughed, “you’ve gotta be kidding me, another piece of software!” But unlike other tools, Carson was intrigued with Figma’s multiplayer collaboration feature. As Carson put it, “it was exactly what ARS needed to have a real-time space to collaborate and work across time zones and — it was a no-brainer.”

I romanticize Figma because it creates this total collaborative environment where no longer is a writer, designer or developer working in different mediums and different spaces.” — Matt Carson, Creative Director, Aisle Rocket Studios

The Whirlpool account team was the ideal testing ground for Figma because everyone was dispersed. Figma would act as the new source of truth and point of collaboration for the Whirlpool account team. “We put to bed the other workflows and tools and centralized everything on Figma almost overnight,” said Carson. In no time, the team was iterating and designing together in a single file, running internal meetings on Figma, soliciting feedback from internal stakeholders and sharing prototypes with clients.

We now have a dynamic, collaborative environment that enables us to brainstorm together, bounce ideas off one another and ultimately be more creative.” — Taylor Madaffari, Copywriter, Aisle Rocket Studios

For client Glenn Roper, Digital Brand Manager at Whirlpool Brand, he’s able to visualize complex design elements in a single view. Roper says, “With Figma I’m able to view and share digital concepts with simulated functionality without needing a login or having developers code the experience.” As a result, the review process between agency and client become significantly shorter because they can iterate together in real-time.

With a shared workspace in Figma, it’s all the easier to host 80 percent of the creative process in the browser. Zaman explains, “We don’t need to physically share a screen to collaborate, rather developers can follow along with designers or copywriters with designers, all within Figma.”

For Taylor Madaffari, copywriter at ARS, having access to make changes to copy directly within designs has completely changed her approach as a copywriter. She no longer has to work in a separate space, drop in copy and make updates so it fits within a design, instead she and Vander Ark are already collaborating in the early stages of design. Madaffari explains, “Figma leveled the playing field and made the entire design process more democratic. For the first time, I feel empowered to have input on designs.” Copy is no longer an afterthought but rather a distinct design element.

And developers have embraced Figma, too. Before, the team was handing off static files to development which resulted in a lot of back and forth. “It was excruciating at times for our developers so they welcomed Figma with open arms,” recalls Carson. Figma reduces the friction of turning visual concepts into code because developers are granted viewer access to files early to make sure designs are achievable from the onset.

The Whirlpool team started to capture the attention of the larger agency, they were leaner, faster and more collaborative. As Zaman puts it, “they had the magic sauce and everyone wanted in.” With Figma, the team consolidated their tooling, tightened complex workflows and centralized files. Even client Glenn Roper, digital brand manager at Whirlpool, agrees, “Figma enables greater collaboration between my team and our agency, saving time and money without sacrificing creativity.”

Today, collaborative open design is the standard at ARS. Inspired by the collaborative nature of the Whirlpool team, Vander Ark is helping get the entire design team at ARS onto Figma. “People are seeing Figma as the new industry standard,” explains Vander Ark. 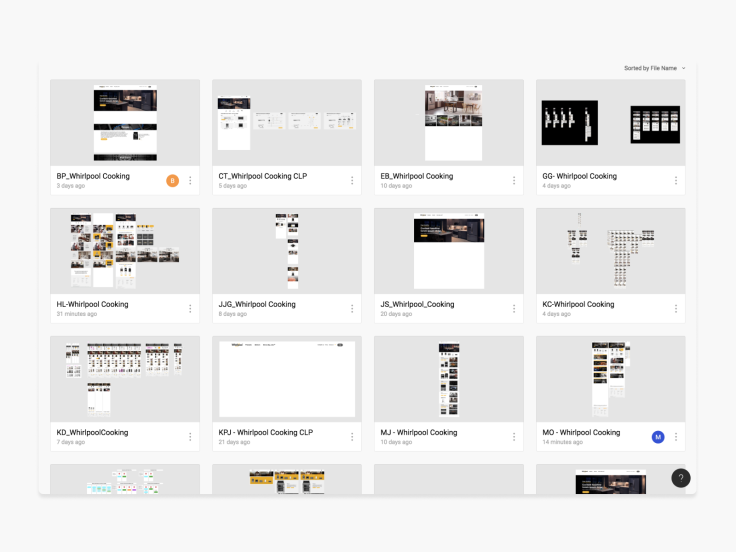 Design systems. The Whirlpool team is embarking on a new journey to build more consistency across the digital brand. Following the principles of atomic design, the goal is to have the atoms built to spec in Figma and saved to the team library as a source of truth. And as the agency moves towards standardizing on Figma, they’re looking to create a one-to-one design language system for base components that can be used across brands — be it Maytag or Whirlpool.

The sky’s the limit for this agency.