How Braintree Cut Time Spent on Design Critiques by 50%

Most design critiques are inefficient, lumbering beasts. A designer presents their work, receiving an avalanche of feedback. They then return to their computer and toil away in solitude. Another meeting is scheduled, where the designer and reviewers realize the feedback was miscommunicated, or the design didn’t work as well as expected, or that new issues cropped up with the change.

The solo designer returns to their computer to keep chipping away. And so on marches the cycle of death. It strips the creativity from the process, and it’s not particularly efficient either.

Designers at the payments processing company Braintree wanted to find another way. When PayPal acquired Braintree a few years ago, there were multiple design teams that began working on different interfaces across each organization. As you can imagine, that ratcheted up the complexity of the process — designers were working with two different style guides, a myriad of services, and developers from a bunch of teams. 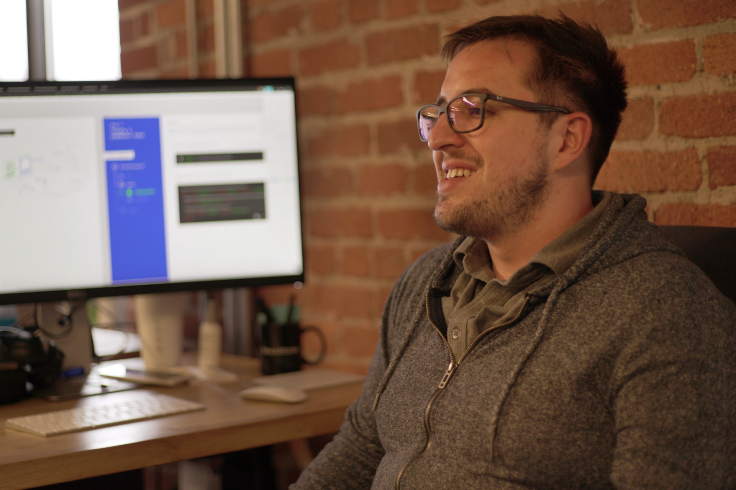 Braintree needed effective design critiques more than ever, so one group decided to experiment with new ways of giving feedback. Over coffee in the company’s cozy, wood paneled office, we spoke about their process with Craig Wattrus, a Braintree designer who works on the three person Developer Experience design team. This specific group creates the documentation that shows engineers how to integrate Braintree payments into their own services.

When Craig’s team started testing new critique methods, he suggested Figma — a tool that’s like Google Docs for design. It allows people to collaborate in design files and share them with a browser link. “I was first attracted to it because it was online and I could use it on my Windows computer at home,” Craig explained. “Now I just think it’s better.”

He says the nature of their design critiques changed overnight with Figma. Rather than setting up several in-person meetings, two Braintree designers would get on an audio Slack call and jump in the file together. Using Figma’s observation mode — where you click the icon of the other person in the file — Craig’s design partner Shannon Miwa was able to follow along on the screen as he showed her different frames. 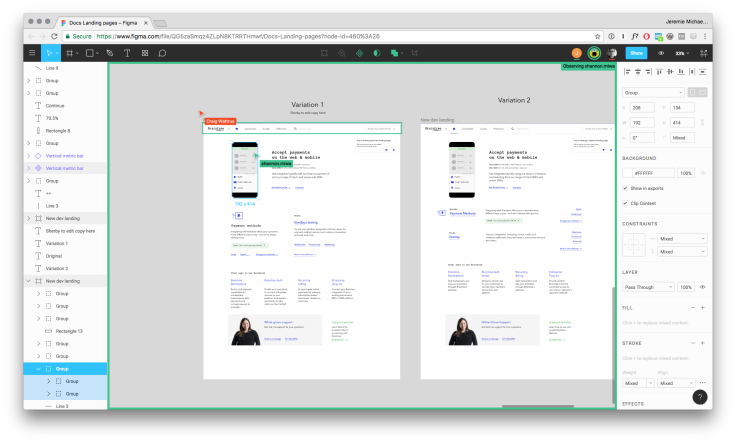 Creative collaboration instead of static critiques “We started really enjoying that as a process,” Craig said. “You get a lot of those moments where everything starts making sense.” He wouldn’t have to scribble down Shannon’s feedback and try to apply it after the meeting. Instead, Shannon was able to duplicate Craig’s artboard in front of him and make fast changes to show what she meant.

“I was first attracted to it because it was online and I could use it on my Windows computer at home,” Craig explained. “Now I just think it’s better.”

The design critiques on Braintree’s developer team quickly evolved into more collaborative work sessions. The designers would each riff off each other, each brainstorming in the same file and peeking at each other’s work for inspiration. Sometimes, one person would start working on a third version, combining the best elements from each of their designs.

“Every time it’s happened we’ve come to a much better place than if I’d just done it myself,” Craig said.

He estimates that using Figma cut down the time the team had to spend in design critiques by 50 percent. “The other person gets their point across really quickly,” he said. “Otherwise, I’d have to do the work and send it to Shannon later and say, ‘Is this what you were thinking?’”

It didn’t just make critiques more efficient. According to Craig, Figma also eliminated the need for the hundreds of messages the team used to send developers over the course of a big project. Instead of constantly re-exporting files whenever there was a change, the designers could send the engineers a link once.

“If the developer wanted to know what the filter button does, while she’s watching in the file I can say, ‘Oh this is how it works’ and duplicate the artboard in front of her eyes,” Craig said. “It lets you give them an answer as quickly as possible.” For the most part, the developers and designers stopped scheduling meetings to go over how the designs were supposed to function.

“Every time it’s happened we’ve come to a much better place than if I’d just done it myself.”

As tech companies expand, there’s more need than ever for clear, efficient lines of communication between members of a design team. For the Braintree design team, creating together in a real-time, online file was the solution.