Each year, Microsoft hosts a company-wide hackathon called, OneWeek. Known as the largest private hackathon in the world, Microsoft employees are encouraged to step away from their day jobs and use the time to dream big, tackle problems, and pursue passions. For the Dynamics365 for Talent design team, that meant it was time to focus on streamlining the laborious handoff between design and engineering.

Ever since the release of Microsoft’s Fluent Design System, the Dynamics 365 for Talent team has been hyper focused on scaling out visceral design elements rather than building out new features (aka, the fun stuff). While striving to hit a 1:10 ratio of designers to engineers on the team, there was an overwhelming need to streamline handoff. Designers had to campaign and negotiate even the smallest design updates. While the engineers had to prioritize each request against the extensive workload that comes with being at a large enterprise company. As a result, it would take up to a week, sometimes longer, to push a single design element to production. There had to be a better way!

As a team of Figma power users, they were confident Figma’s web based API could do the trick. So for their OneWeek project, the team hacked the workflow. 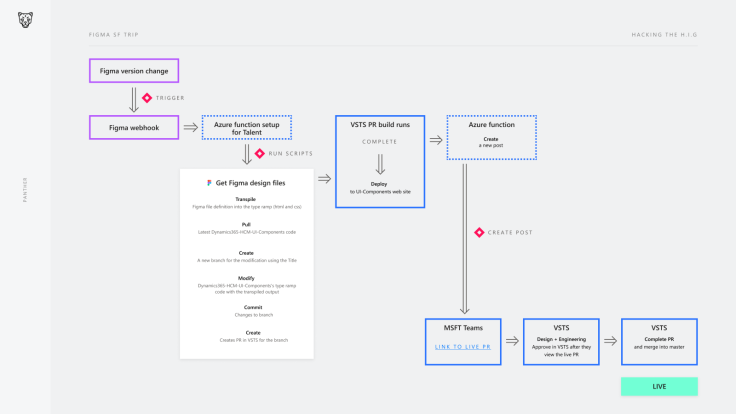 By utilizing the Figma webhook, designers can save a new version of a file which then automatically creates a pull request for design and engineering to sign off on and commit — and voilà, designs are pushed live! According to the team, the new automated process can easily reduce their workflow by 70%. That means designers have more time to design and engineers have more time to focus on development. A win win for all.

To learn more about Microsoft’s use of Figma, register for Microsoft x Figma — Scaling Design Systems on 10/4 in San Francisco.

Valerie Veteto | December 15, 2017
18 designers predict UI/UX trends for 2018
A designer’s obsession always circles back to one simple question: How can we improve the user’s experience?
Nikrad Mahdi | April 12, 2017
An alternative approach to rate limiting
A few weeks ago at Figma, we experienced our first-ever spam attack.