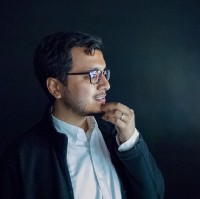 We launched Smart Selection three months ago and the response has been incredible. Designers told us it saves them “millions of hours” 😉by cutting out tedious tasks. Instead of painstakingly rearranging lists of elements they can simply hit the Tidy Up button and power-up their workflow.

Since the feature has been so useful for people, we decided to expand on its functionality. With Smart Selection 2D, you can now organize both lists and grids, i.e. horizontally and vertically. We released Smart Selection 2D earlier this week and we can’t wait to see what you do with it. (For those new to the feature, skim to the bottom of the post for a quick primer.)

There’s a lot of potential use cases, so we tweeted a few examples this week to help spark some ideas:

Smart Selection 2D works just like before. You can use it on any selection of two or more items with equal, uniform spacing. With items selected, you can adjust the spacing, position and size of these items at once.

Rasmus Andersson | October 11, 2018
Introducing Smart Selection
We'd like to help you speed up your explorations
Carmel DeAmicis | May 25, 2017
5 essential ways to use design constraints
Remember the good ‘ol era of tech design, when you had to create interfaces — at most — for a PC and a Mac? Me neither.