This website shows that to find talented female designers, you just need to look

It’s no secret that talented women in tech often don’t get as much attention as their male counterparts.

A Mic reporter, tired of the bullshit, recently made her own list of 1,000 qualified women in tech. In 2015, a Medium post collecting different groups of venture capital investors who are women was also making the rounds. These lists aren’t exactly a cure-all for gender discrimination in Silicon Valley, but they prove there’s plenty of women in tech to at least follow on Twitter (::cough:: Elon ::cough::).

Now, there’s a website highlighting women in tech design. Jules Forrest, Product Designer at the venture capital firm Sequoia, has gathered names from people in the industry and compiled them into a easily perusable website. People can filter the list by different categories, like “founder” or “UX research.” As we start recruiting more designers at Figma, we’re looking through the site ourselves. 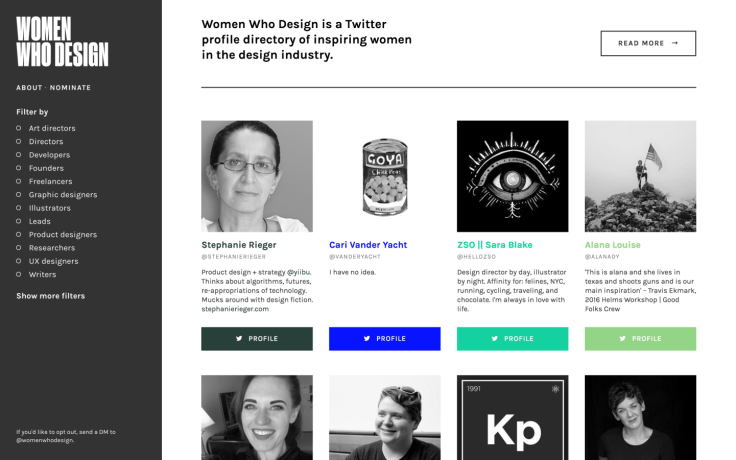 “I’m tired of excuses that there aren’t enough women to speak at conferences or lead teams. Yes, there are! They’re right here!” Jules told Figma. “I want it to be normal for people to have as many female voices on their screens as they do male voices.”

Jules was inspired to make the website by a recent viral tweet from Shopify Design Lead Helen Tran. Helen was sick of people naming only male design influencers during discussions, so she asked her followers to recommend the women they most respect in the industry.

Her tweet reverberated through Silicon Valley’s design community and the response was electric. Within days it had been retweeted 256 times, liked 704 times and received 368 replies, with everyone weighing in from Buzzfeed’s VP of Design to one of Google Ventures’ Design Partners. People sent over more than 450 names.

With a simple question, Helen reminded people that despite the gender inequality in tech, talented female product designers are everywhere.

In making the website Women Who Design, Jules is initially pulling the names from people who responded to Helen’s tweet. But she’ll include a nomination form on the site so she can add more submissions over time. The list could be used for recruiting purposes, but it also may serve as a general resource for talented people to follow or try to work for. She provided an email for anyone who wants to opt out of the list — whether because they’re uncomfortable being labeled “a woman in design,” or in case they don’t want their information easily searchable.

“This is a painful paradox and one I haven’t fully worked through myself yet,” Jules admitted. “I don’t want to create a situation where talented designers are judged by a modifier like gender, but I also know it’s important, especially for younger women, to know they have peers and leaders to look up to. I hope with time that the right balance becomes clear.”

Regardless, Jules’ website and the response to Helen’s tweet are both powerful reminders that the old excuse — there’s no women qualified for this role or conference speaking slot — just doesn’t cut it. To find talented hires or inspiring role models, you only have to look.