Here at Figma we know news can get buried and release notes can go overlooked… no matter how many times you refresh Twitter. So we’ve decided to resurface some evergreen features and give them five minutes of Figma blog fame. Last week we zeroed in on Observation Mode, and this week? It’s all about Sketch Import, which lets you transfer Sketch files directly into your Figma file space.

Even though we released Sketch Import in June of 2015, we still see fans discovering it. For example, the tweet below is from only two months ago. 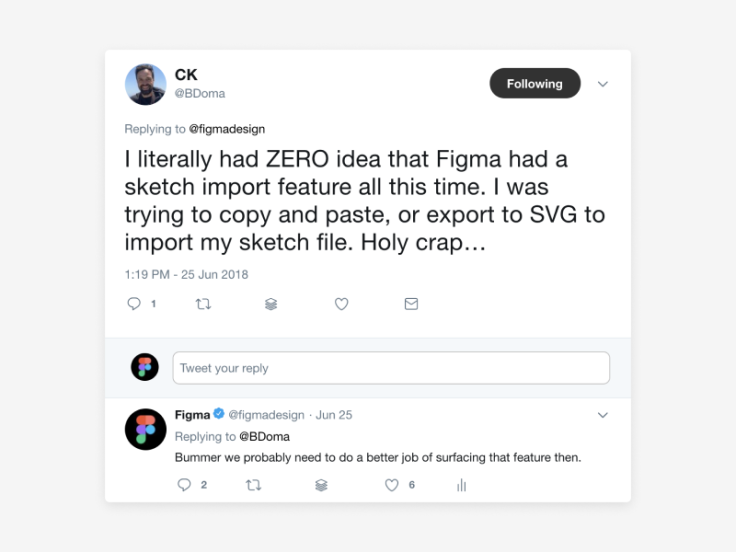 Why Sketch Import is essential for Figma users

Our Sketch Import is like a hidden secret power because of its vigilant accuracy. In addition to preserving your pages and resizing constraints, it can even import symbols into Figma as components — a neat trick for those companies building out or maintaining a design system. And in the case where something doesn’t work properly, please contact us through the in-app support widget.

There are three ways to get the job done.

Voilà! A new Figma file will be automatically created with the added image(s). Feel free to check out our Help Center article if you’d like to dig deeper.

Which feature deserves the spotlight next?

We know designers love the nitty-gritty details and especially the “a-ha!” that comes from championing a treasured feature. To make sure we’re highlighting features the community loves, what would you like to read about next? Let us know over on Spectrum!

Valerie Veteto | December 15, 2017
18 designers predict UI/UX trends for 2018
A designer’s obsession always circles back to one simple question: How can we improve the user’s experience?
Valerie Veteto | June 28, 2018
Art of Listening: One designer's foray into experiential design
Mike Godlewski, an Interaction Designer at IDEO, paraphrased this quote over wonton soup in San Francisco’s Richmond District. Although visual design is his forte, last year he founded the music event Art of Listening.